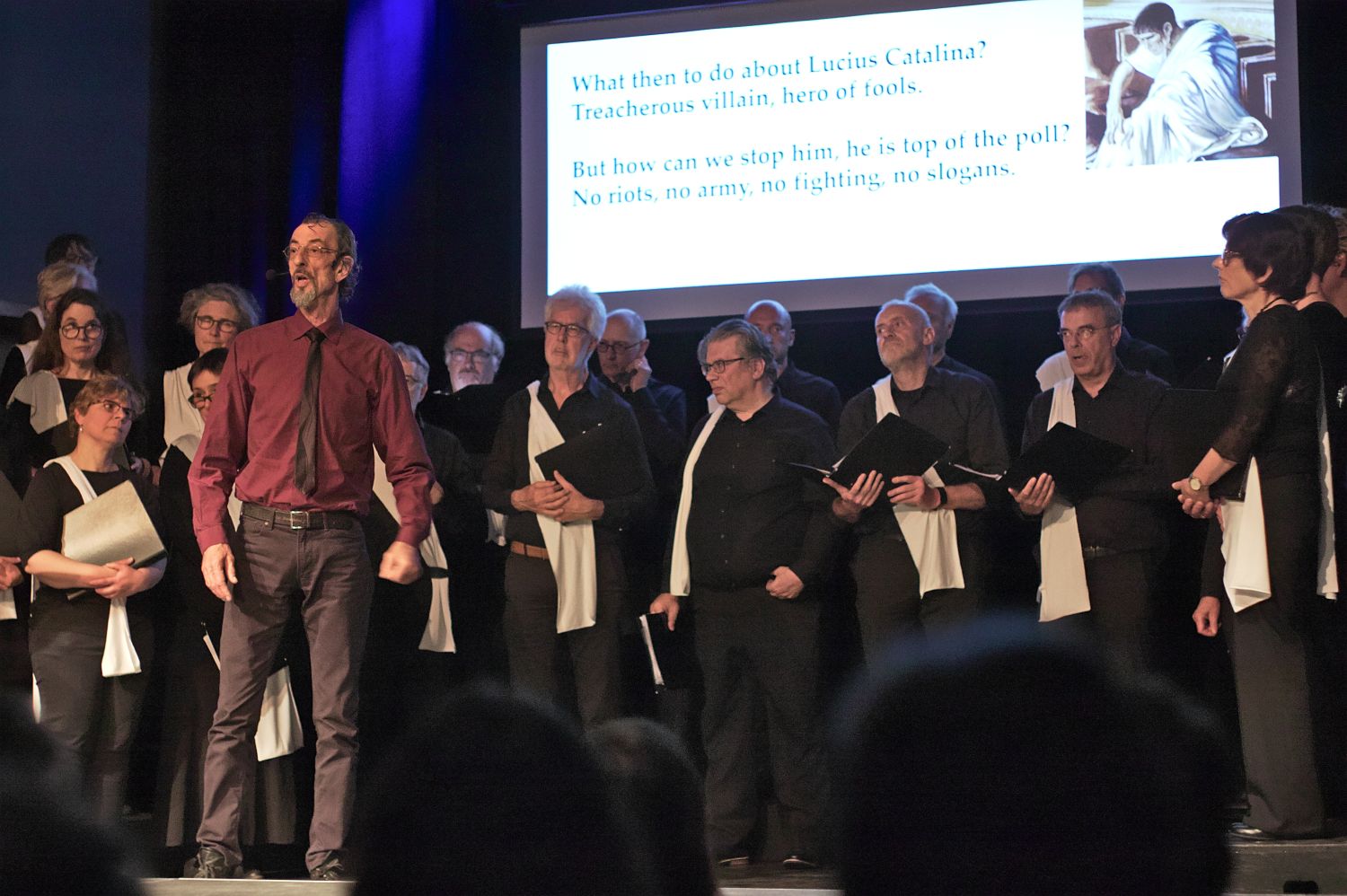 What was so special about this event? What did we get out of it?

I want to look at this first from the audience’s perspective.

The spectator was in for a show, an evening of performing arts. There was continuity: this was a journey rather than a loose collection of speeches. Combined with consistent quality and an overarching theme, that made for a unique experience.

So many elements came together: music, stage lighting, speeches, announcements, visuals, exchanges between choir and speakers, and between audience and performers. It was a total, multi-sensory experience to feed every part of the brain.

As such, it was also a dense experience. There was always something new on the horizon. Yet, crucially, the listener also had time to process ideas from each speech while listening to beautiful choral music.

Finally, speeches worked on a different level than normally. The speakers made impressions, conveyed ideas and points without being explicit about them. They tuned down the educational aspect of most Toastmasters speeches and rather brought entertaining content, impressions and subtle messages.

What went on from the speakers’ perspective?

One of the greatest creative challenges for us, was turning explicit messages into subtle ones. As it turned out, the speakers enjoyed this challenge, and each in their own way, overcame their obstacles beautifully.

Creating an evening like this is an entirely different experience than giving a one-off speech and then receiving feedback on it. Most of that feedback is lost forever, since the speech won’t be repeated. It always feels a little like a judgment by the evaluator. Not so in this case. Here, feedback was a natural, integral part of the creative process. Kaatje Raes, one of our fabulous speakers, said “… enthousiasme en gigantische sprongen vooruit die ik heb kunnen maken door dit project. Gevolg vooral van met jullie allen samen te werken en continu feedback te krijgen. Je mag me hier gerust op citeren “
After the event, we got closure. No more feedback other than “it was a wonderful evening”, and that was much gentler on the soul.

The audience was a broader, more general audience. We were lucky enough to have 75 spectators. If you always speak to the same group, you build bad habits. You give too much importance to some things and not enough to others, based on the group’s idiosyncrasies. It is very necessary to speak to a broader audience regularly. This event brought us out of the bubble and into the real world.

Finally, diamonds grow by pressure and time. Well, there was obviously a certain pressure to perform, and we also dedicated more time to reach our desired level than we would ordinarily do. The result: diamonds!

Generally, we’re individualists. Now, we were in the same boat together. We were all working towards a shared goal. We depended on each other. For myself, it felt great to put my fate in other people’s hands, but also to have their fate in mine. My ego surrendered to a greater whole and I loved it.

I rediscovered how much I love leading a creative team. The initial drive came from Florilegium and Martin Jugmans. He gave us a strong start: he took us back to Roman times and to Cicero’s life, inspired us with his impressions of the ancient art of rhetoric. He painted a picture of what the evening could be like. After that powerful initial drive, Martin focused more on his own part in the show and I took over the project leadership. I felt myself walking the tight rope, doing the balancing act. Creative, strong-minded people require a particular approach: you have to drive the group forward and create the conditions for synergy. But you don’t have all that much influence on the exact direction the process takes. And you can’t make things come together. You have to trust that they will come together by themselves, and that they will do so in time. I loved it.

My neighbour also came to see our show. He was very impressed. He told me “I got to know you better. You’re not only the computer guy (he always sees me working on the computer), but also the artist and the philosopher.” I had to think about that for a moment and then admitted: indeed, I have a little bit of those in me. They need practice, though, and that’s probably why I enjoyed this so much.