This is an interview with Wim Wolf who was the co-Master of Ceremonies at the recent TEDx event in Leuven and I know he did great as I was in the audience.  The objective of the interview is learn a bit more on how Wim and his co-MC Vanessa Palsenbarg prepared for the event and what it was like to wear a red shirt in public.

Q1: What exactly was your role at TEDx ?
I announced TEDx speakers, together with my colleague Vanessa Palsenbarg. In a discussion with the TEDx team, we decided that having 2 dedicated announcers would provide the smoothest and most professional transitions from one speaker to the next.

I also got to do the fun part, right after the opening by TEDx Leuven founder Bruno Delepierre. That fun part was asking people to silence their phones. I learned from people in this club how much room for creativity there is in that!

Q2:  How did you prepare for this?
Quite a lengthy process! Vanessa and I got together a first time to plan our approach. Then we collected information about the speakers from the various TEDx team members. We wrote our intros and shared them with each other. Then we got together again and gave each other feedback. We presented the intros to the TEDx team and collected their feedback. We made corrections and added information that had been missing before. Finally, about a week before the event, we recorded test videos of our performances. With the additional challenge of having the evil eye looking at us (the camera), we found out where our memory lapses were and which parts of the announcements needed a bit more work. Finally, on the day, we went to see the sound people backstage and rehearsed a few announcements with our headsets on. 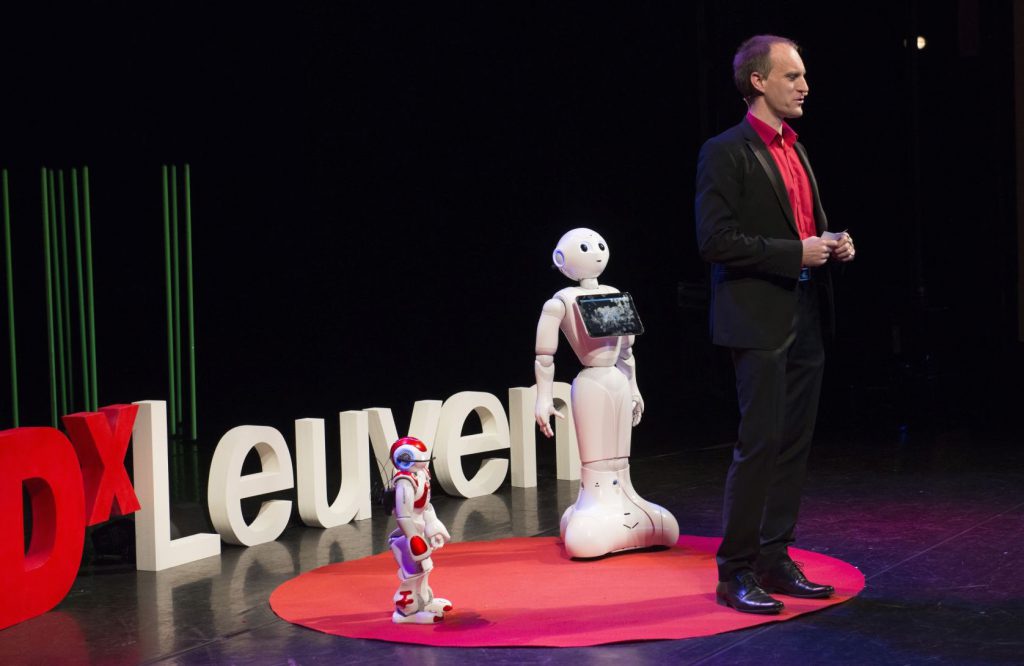 Q3:  Did you do something like this for TEDx before?
Not really. Until now my connection with TEDx was that I was part of the team from this club that coached speakers. Again this time, we coached 2. Alexander Van Steenberge, Frank Turley and Joan Ceuterick were also in the team. It was my first time for an audience of 550. Announcing speakers, of course, was not new to me after so many club events.

Q4:  What things went wrong and how did deal with this?
There were some last-minute changes in the speaking order and in the opening sequence. Bruno informed us early enough in the morning. Vanessa, Bruno and I talked it through and made sure that each of us knew how it was going to work. With good communication and professional people, these things are not a problem.

Then there were 2 occasions when the speaker had already been on stage for more than a minute and still there was no sound. I went on stage and brought them the hand-held microphone. This required some initiative on our part because at such moments, final authority or responsibility is not always clear. Bruno would normally have the final say but we didn’t know where he was. He may have been in the control booth, or dealing with some other issue. We decided that the audience had already seen us on stage as the announcers and therefore as people with a certain responsibility, and so that it was up to us to take action.

Q5:  What would you do different next time?
It would be wonderful if I could be a little bit more relaxed about it, particularly in the hours leading up to the event. I repeated my intros over and over again and I got quite excited / nervous. I think that’s good because it gives you energy, but a little bit less would have been even better.
Also, I would create and implement a few additional procedures, including for example the testing of all microphones before the event, rather than just the ones that we were wearing.
But other than that, the event was very well organised and I was happy to participate.

Q6:  From a TM point of view, how were the speeches
TEDx talks are very diverse. Both in subject matter, content and also in quality of delivery. I like that they are somewhat longer. It’s easier to transmit a profound message in 15 minutes than in 7 minutes. I also like that TED and TEDx are held in such high esteem. Speakers are usually very motivated to prepare, so they give it their best.

Q7:  What are your top tips for giving a TEDx talk?
First of all, if you have the possibility and you’re still hesitating… do it! If you were asked, then that means that you have a story worth telling. You can help people by going for it. As public speaking amateurs, we speak for our own purpose, because we want to get better. But TEDx speakers speak for the benefit of the audience. They want to inform, educate or inspire their audience.

Other than that, it’s the same thing again: get feedback! If not from Toastmasters or a professional coach, then at least from colleagues. The important thing is to create one or two challenging moments before the actual TEDx performance. At those times, you will find the weaker points in your talk so that you can improve them. You also gain so much confidence if you’ve already gone through the challenge once.

Q8:  Anything else?
Yes! I’m grateful to the people from Toastmasters Fonske Leuven and several other clubs. One person who absolutely needs to be mentioned is Joan Ceuterick, who made the first connection with the TEDx team and convinced them that we had something to offer. He also inspired me to pick up this challenge.