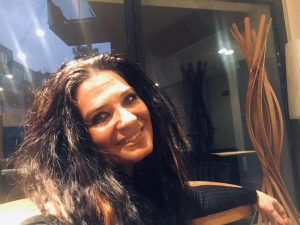 Monica joined TM in November 2015 and since then she became a very active and enthusiast supporter of Toastmasters. She immediately jumped in the role of the VP Ed and then occupied as well the role of VP PR where she excelled for 2 years managing to gather in each meeting at least 9 guests and to increase the number of the members of the Atomium Club while she was the President. She has participated too many speech contests on club, area and division level on prepared speeches, humorous speeches and even impromptu speeches.

Monica believes that no matter how good you think you are in public speaking, you can improve much better in the toastmaster’s family; therefore, she was the mentor of 3 mentees since 2017, covering all speech projects in the CC manual and major club leadership roles (General evaluator, Toastmaster, Table topics Master). She also continuously supported toastmasters through varied educational events and other public events organised by different corporations by actively promoting the benefits of joining the toastmaster’s family.

In her private life she is a mother, a trainer and a coach and she loves to accompany people in their self-development quest. When she is not too busy with toastmasters, Monica is organising public self-development events and she is rollerblading and dancing.Laetitia joined the S.H.A.P.E. Toastmasters Club in 2016. S.H.A.P.E. is an English-speaking club in Mons on N.A.T.O. basis. As Area Director B1, she supports the following clubs :