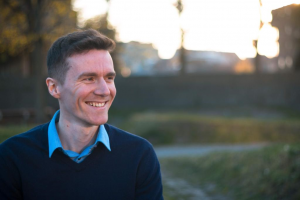 Ignaas joined Toastmasters in 2016. After he watched a DVD of Tony Robbins, he realised he wanted to improve himself. He is fascinated by the art of the spoken word and has decided to join this mighty speaking force!  “It’s such a pity to be on a stage and being petrified. You only live once, so why not do something about this fear. Besides, as an individual you have the power to convince anybody with the power of your words!”

After joining, TM Ignaas quickly became the VP of membership, club president and secretary in Toastmasters Ghent. Now, he is ready to take on his next leadership role as an area director.

Ignaas is a family doctor and General Practitioner. In addition to Toastmasters, he plays improvisation theatre at Compagnie Amai in Ghent as a way to release his creativity.