Division B is tremendously proud of Daniel Mouqué (The Brussels Toastmasters Club), who won the International Speech Contest at the District 59 Spring Conference in Luxembourg. Daniel will represent our District in the semifinals of the World Championship of Public Speaking, at the Toastmasters International Convention in Washington, D.C., in August.

Team B had a real blast in Luxembourg. Besides performing spectacularly in the Spring contests and rooting for their contestants, the more than 60 strong delegation from Belgium, Luxembourg and Northern France attended as well as lead captivating workshops, featuring Tom Aerden, Karin Bral, Margarida Brites, Crista Filip, Covey McAllister and Thomas Vervaet. And of course, we went above and beyond in partying, dancing and networking, like only Toastmasters can!

The road to Washington, D.C.

In the coming months, all clubs in our District are warmly invited to grant Daniel stage time to make his winning speech even better and to test material for the speech he is preparing for the final — without a shadow of a doubt, he will need that speech! What better way to support our District contestant, on the road to Washington, D.C.?

The first club to host the District Champion is Toastmasters Hasselt, at their 5th anniversary meeting on Saturday, 28 May. Register for this meeting!

The Brussels Toastmasters Club, Daniel Mouqué’s home club, will be welcoming home their District Champion on Tuesday, 31 May. Register for this meeting!

In 2015, contestants from Districts 59 and 95 took part in several “The Road to Vegas” events, one of which was organised at the Artful Orators club in Brussels. In London, two more districts joined the party for a shower of feedback. Right now, initiatives are being taken throughout Region 11 (of which all said districts are part) to stage events that will support our contestants as one EMEA family, in true collaborative Toastmasters spirit. We will keep you posted!

Credits to Sean Ryan and Margarida Brites for compiling and sharing this list.

On 23 april, the Lille Toastmasters Club organised a terrific event, everything went well! We were so proud of the core team! Now, Luxembourg, here we come!

Our contestants were well-prepared and impressive on stage. There was real emotion with the depiction of traumatising life experiences! The response amongst the public was immediate with real tears. The speeches were very touching when inspiring. And more humoristic when depicting the male-female realities.

Division B hereby proudly presents its contestants that will compete at the District 59 Spring Conference in Luxembourg: 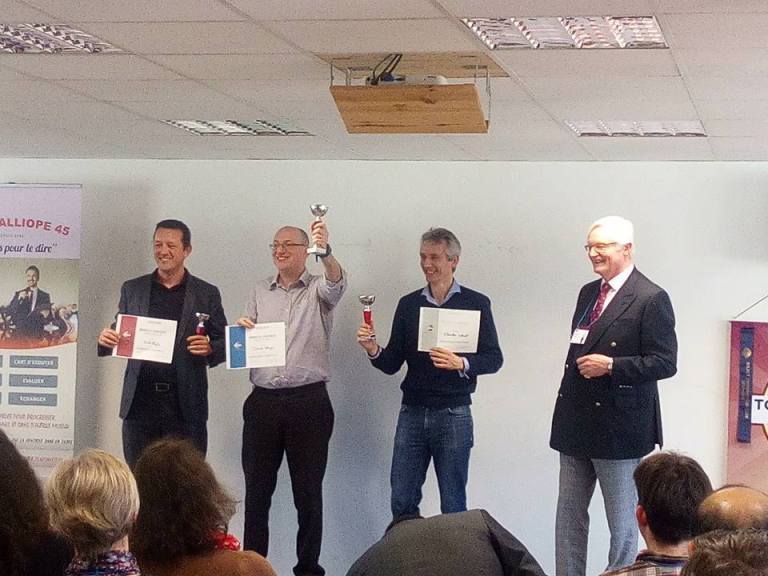 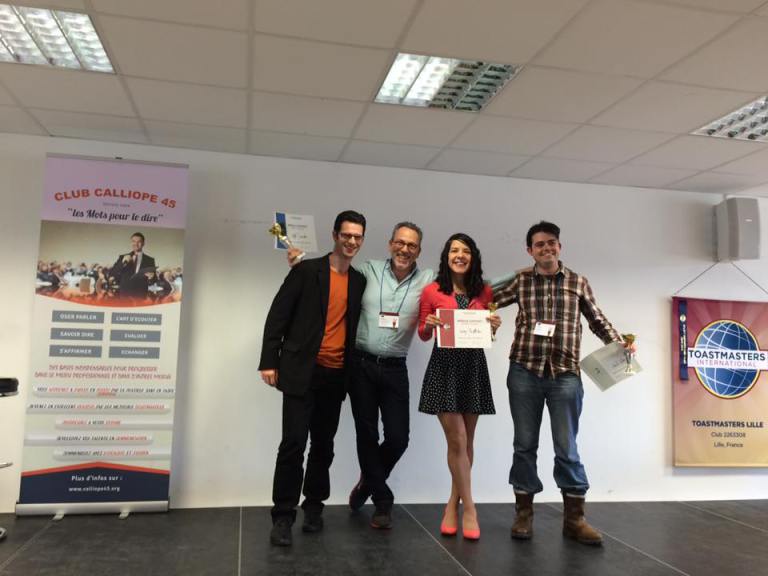 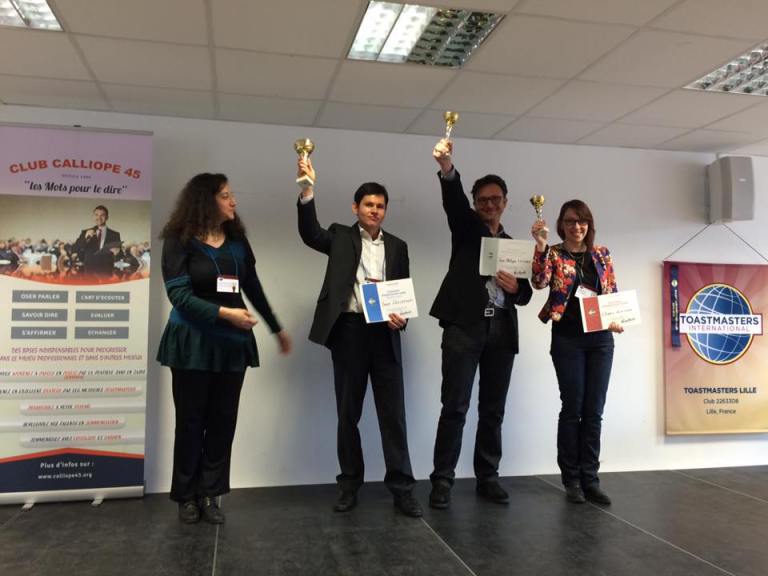 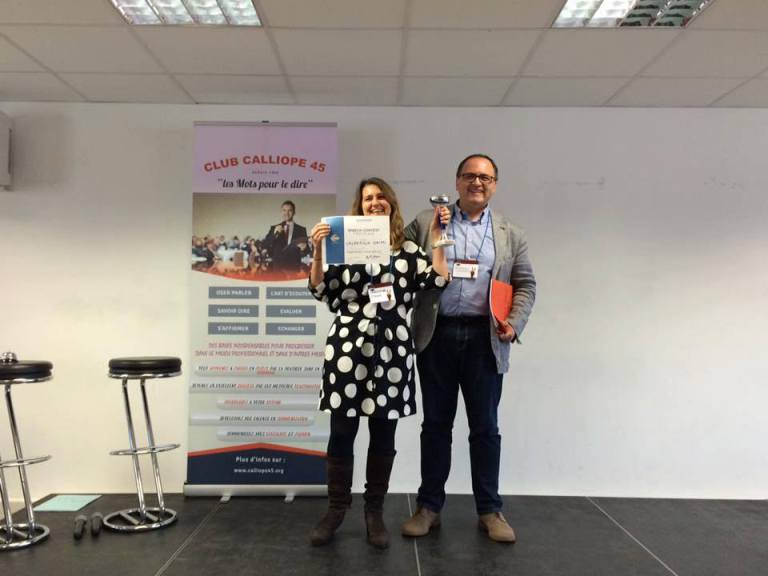 Division B takes feedback and mentoring very seriously amidst all the fun. On their way to Luxembourg, the four contestants received on Wednesday 11 May the infamous shower of coaching at the Artful Orators, Brussels’ Advanced Toastmasters Club. The contestants received feedback in English, French and Italian: that’s the stuff champions are made off!

Our multilingual recommendations to the contestants: 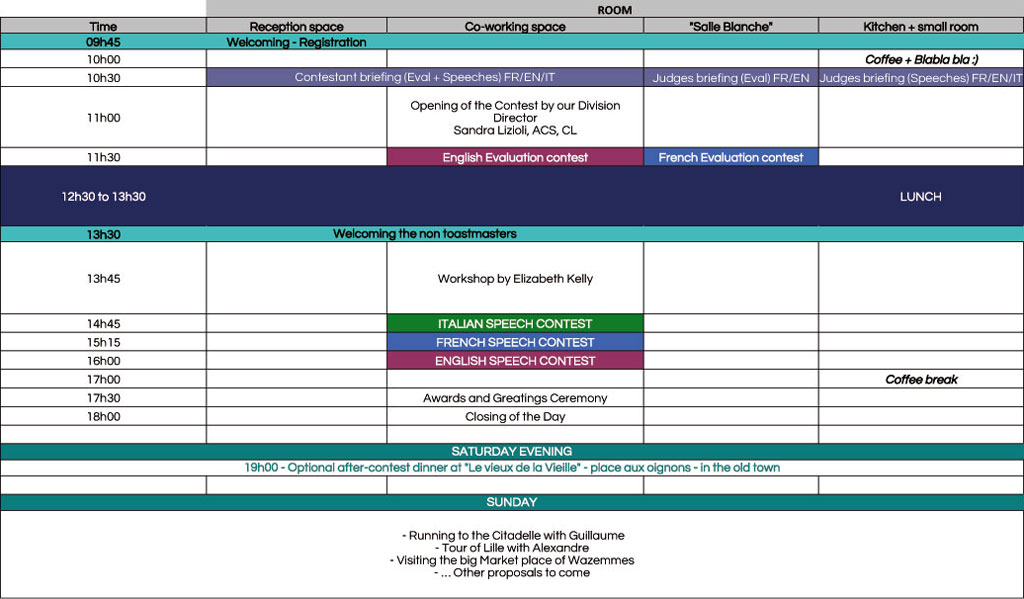 At some point in your professional life, you will inevitably be confronted with cultural differences that may challenge your behaviour. A faux pas is easily made and can be a serious roadblock to the success of your endeavours. If you understand the culture in which you are conducting business, it will help you to be more successful. Knowing how to handle cultural sensibilities is an essential part of being an effective communicator.

In her workshop at our Division’s Spring Conference in Lille, intercultural relations expert Elizabeth Vennekens-Kelly will outline the major challenges of business and interpersonal communication in a multicultural environment. She will provide recommendations to make your communication more effective and culture savvy. 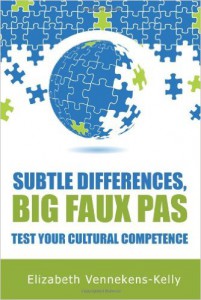 Elizabeth Vennekens-Kelly is an intercultural trainer, consultant, and the author of Subtle Differences, Big Faux Pas. In this cultural guide she helps and encourages individuals to realize the extent of cultural differences and the value in gaining an understanding of the cultures in which they interact.

Elizabeth’s goal is to help individuals develop the cultural competencies they need to be successful and to encourage people to make the most of the unique opportunity of living outside their passport country. She combines her business experience, familiarity of expat living and intercultural knowledge to help individuals to deal with the complexities of living and working abroad. She trains individuals working in multicultural settings, people who are relocating overseas and those returning home, to effectively interact and communicate in the varied situations they encounter.

At the Lille Division Conference, Elizabeth will share a plethora of striking examples in verbal as well as non-verbal communication, from the simplest gestures in everyday life to the noble art of toasting — indeed, even if you are an experienced Toastmaster, you should think of the cultural context in which you are required to propose a toast! Elizabeth will show you how to leverage your cultural competence and be successful in today’s multicultural environment.

You don’t want to miss this workshop? Register now!
Check out the Conference programme!

On Saturday 23 April, Lille Toastmasters will be hosting our Division’s  Spring Conference at La Grappe, a venue in the heart of the capital of Le Nord.

After an inspiring keynote by intercultural relations expert Elizabeth Vennekens-Kelly, the best speakers of Belgium, Luxembourg and Northern France will compete in the following contests:

Check out the Conference programme in detail!

The entrance fee for the Division Conference is 35 euro. You will find the payment details on the registration form.

If you come by car, there are 30 parking slots available in the venue’s underground garage, at 5 euro each. Please indicate upon registration: first come, first served!